DEADLY LIES by CHRIS COLLETT
Discover a new detective in a tough city. DI Tom Mariner thinks he’s seen it all, but now he faces an investigation which will push him to his limits.

Journalist Eddie Barham is found dead in his home. A syringe in his arm and a note by his side reading, ‘No More.’

Open and shut case of suicide? Not for DI Mariner. Hours before, he saw Barham picking up a prostitute in a bar. Mariner discovers Barham's younger brother, Jamie, hiding in a cupboard under the stairs.

Jamie must have witnessed his brother's death, but his severe autism makes communication almost impossible. Mariner is determined to connect with Jamie and get to the truth. And is the journalist’s death related to his investigation of a local crime kingpin?

What other dark secrets does Jamie hold the key to and can Mariner keep his relationship professional with Barham’s attractive sister, Anna?

In a nail-biting conclusion Mariner races against time to prevent more lives being lost.

Perfect for fans of Peter James, Ian Rankin and Peter Robinson. This is the first book in the DI MARINER SERIES, more books coming soon!

THE SETTING
Birmingham is a city of stark contrasts with a rich cultural and historical heritage. Playing a key role in the industrial revolution, it helped shape the nation’s manufacturing industry

But with its many green spaces, Birmingham also borders on the beautiful countryside of Worcestershire and Warwickshire, is just a few miles from Stratford on Avon and a short drive from the wild country of mid-Wales.

Birmingham’s population is large and ethnically diverse, and while urban regeneration has forged a modern and culturally vibrant city, the decaying remnants of the industrial past and 1960s concrete jungle give it a unique and gritty character; the dark underbelly policed by DI Tom Mariner and his team.

Detective Inspector Tom Mariner is, on the surface, an average dedicated policeman, but his experiences as a younger man have given him an insight into life on the dark side, and a clear sense of right and wrong. Mariner has little interest in material things. He lives in a modest canal-side cottage, enjoys the occasional (real) beer and game of dominoes and drives an old car. He is most at home in the outdoors, with an OS map and a compass, and in times of crisis, will take off and walk for miles in any weather.

Police Constable Tony Knox has recently transferred to the West Midlands force and finds himself back in uniform following an undisclosed transgression. A scouser with the gift of the gab, and an irrepressible ladies’ man, Knox is initially wary of the inscrutable DI Mariner, but, when a need arises, is grateful for his unquestioning support and the lack of curiosity about his personal life.

'Collett is a wonderful writer, subtle, clever, strong on atmosphere and character. This is a fitting follow-up to her debut and reassures the crime fan that the police procedural is in safe hands. More, please' Yorkshire Post
Background to the DI Mariner books

Although I was not a great reader as a child, I was always captivated by adventure stories and mysteries, and I loved making up tales of my own. But I didn’t know anyone who had written a real book, and so grew up firm in the belief that people like me didn’t write books, and I chose a more conventional career path. The childhood love of adventure turned into an adult passion for reading crime fiction; Conan-Doyle, PD James, Ruth Rendell and Ian Rankin among others, but it wasn’t until a serious bout of insomnia coincided with the arrival of our first Personal Computer (as they were called back then!) that I returned to writing. It was at around this time that I’d also become preoccupied with a ‘What if..?’ scenario. In this case, ‘What if the sole witness to a serious crime had autistic spectrum disorder and was therefore unable to communicate what he had seen?’ What I pictured in my mind’s eye was a police interview room, in which detectives were attempting-largely unsuccessfully- to interview this young man. And that’s where Deadly Lies began. One scene led to another and, over time, I began to realise that what I’d written was shaping up into a book – the kind of book I liked to read. The characters seemed to emerge almost of their own volition as the story unfolded. Jamie, who has ASD, is based on my years of working with young people with learning disabilities and their families. It was also natural to set the action in Birmingham, the vibrant city where I have lived for more than thirty years, and come to know intimately. What I was less familiar with at that time, was the police procedural aspect, nor did I have any contacts I could call on. So, I quite simply phoned my local police station and was put in touch with an extremely helpful DI, who patiently responded to my many questions. Since that first book I’ve developed a number of further contacts and now have one particular recently-retired DI who I meet with regularly for advice and who probably knows Mariner and his team as well as I do!

Chris Collett grew up in a Norfolk seaside town where she worked in a boarding house (now defunct) a local bakery (closed down) and a crisp factory (razed to the ground). Graduating in Liverpool, Chris has since taught children and adults with varying degrees of learning disability, including autism. She is now a university lecturer, with two grown up children, and lives in Birmingham; DI Tom Mariner's 'patch'. She has published short stories, teaches creative and crime writing and is a manuscript assessor for the Crime Writers Association.
Find out more at www.chriscollettcrime.co.uk 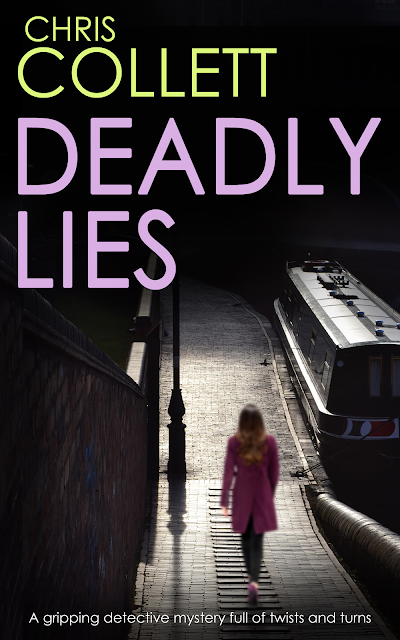